It is common knowledge that exercising does amazing things for the body, but exercise is also great for the brain.

Exercise reduces the chances of circulatory based health problems, such as strokes, and increases oxygen delivery to the brain. In general, anything that is good for the heart and circulation is in turn good for the brain. 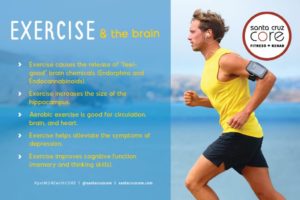 Exercise and the Runner’s High

Exercise has many positive effects on the brain, one of which is its ability to alleviate symptoms of depression. While the brain remains the most intricate organ of the human body, and much remains to be learned about it, there are associations between exercise and the release of “feel-good” chemicals in the brain, such as endorphins and endocannabinoids.

Interested in trying the services at Santa Cruz CORE? Be sure to Attend CORE’s 8th Anniversary Party and Health Fair!

Regular exercise causes the release of endorphins in the body, which interact with receptors in the brain to give the perception of reduced pain. Endorphins also trigger a positive feeling in the body and make us feel good, hence the term “runner’s high.” Similar to endorphins, endocannabinoids stimulate what is known as the endocannabinoid system, which is composed of receptors along the surface of cells in the central and peripheral nervous systems. Specifically, the endocannabinoid “anandamide” has been found in higher levels in the blood after running, which contributes to the “runner’s high” feeling, just like endorphins.

Exercise also improves sleep and reduces stress and anxiety, in part due to its anti-inflammatory properties and its ability to stimulate the release of growth chemicals, known as neurotrophins, in the brain. Physical activity is a healthy way to handle stress, and also helps to utilize the increased levels of neurotransmitters associated with stress, like adrenaline and cortisol. In addition, healthy circulation promoted by exercise provides a pathway from with cells can “detox” and remove inflammatory agents and excess fluids that can collect in various parts of the body.
Read more >> Vasper: The Miracle Workout

Improved Memory and the Hippocampus 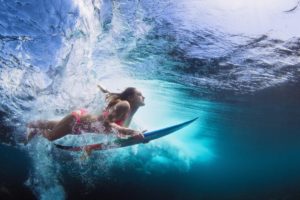 In addition to helping with symptoms of depression, exercise has been proven to improve memory and thinking skills. Studies show that regular aerobic exercise appears to improve the size of the hippocampus, which is the part of the brain responsible for verbal memory and learning. Aerobic exercise is defined as exercise that increases the heart rate, and therefore increases blood flow and oxygen delivery to tissues in the body.

In terms of what exercises are best to reap these neurological benefits, the consensus is that any exercise is better than no exercise. However, regular aerobic exercise seems to have the most impact on brain health, with the recommendation of approximately 150 minutes of moderate intensity aerobic exercise per week. Checking with a Certified Personal Trainer is a great way to assess your skill level.
Great examples of aerobic exercise are dancing, running, cycling, swimming or group classes like CORE’s own Semi-Private Training classes!