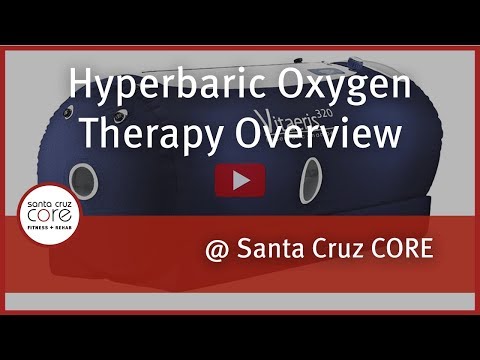 Hyperbaric Oxygen Therapy (HBOT) involves placing a patient in an environment of pure oxygen under increased air pressure. This allows for an increase in oxygen uptake by the lungs and oxygen delivery to healthy or injured tissues. Normally, oxygen is solely transported in the body through red blood cells. Using HBOT, oxygen is dissolved and delivered into the body's fluids, plasma, bones, and more. In this way, it treats formerly unreachable damaged tissues. There is a higher oxygen demand associated with tissues undergoing repair in the body. This means that one requires more oxygen to recover from an infection or injury.

HBOT is commonly used for the treatment of decompression sickness (the bends) in divers. Individuals with conditions that interfere with healing such as diabetes or radiation sickness can also benefit from hyperbaric oxygen. Additionally, hyperbaric oxygen triggers the release of various growth factors and stem cells that facilitate healing!

Hyperbaric Oxygen therapy has been used for decades in wound management, toxicology, diving complications, and to treat vascular deficiencies. By its nature, it stimulates the immune system. It is now being used to treat concussions, migraines, and even to boost results of Prolotherapy. For example, HBOT increases the yield of stem cells harvested from adipose tissue for Stem Cell treatment.

Santa Cruz Core is now able to offer Hyperbaric Oxygen therapy with the HBOT model v320, which allows for up to two people to comfortably fit inside the chamber during each session. It should be noted that we recommend 20 - 30 sessions to see the best results. 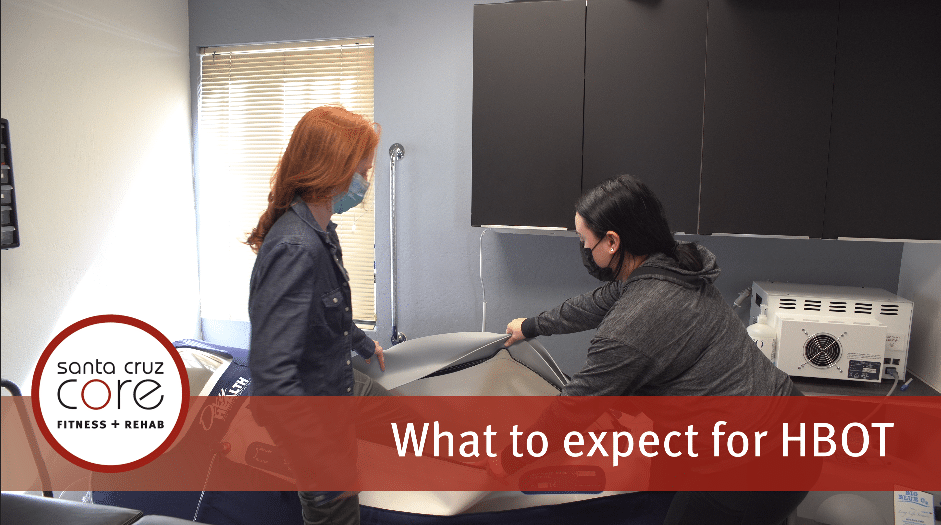 I used CORE's Hyperbaric Chamber and loved it! It was a nice, peaceful break where I could relax and let my mind rest. Not only that, it left me feeling energized afterward! Thank you, CORE, for bringing this to Santa Cruz, and at such an affordable price compared to other practices!

The entire team at Santa Cruz CORE has always been incredibly kind, devoted, and caring in addition to being very well skilled in all of their therapy specialties and helping people with injuries, and improving their life and rehabilitation physically.  Both Jamie and Beau as well as all their employees are kind, professional people with the latest training and rehabilitative therapies. Their HBOT chamber is incredibly helpful.

The HBOT therapy chamber is large enough, so I don't feel claustrophobic. In addition, I was given supplemental oxygen, with a mask, which eased the feeling of being confined. I was able to relax and even dozed off a few times! 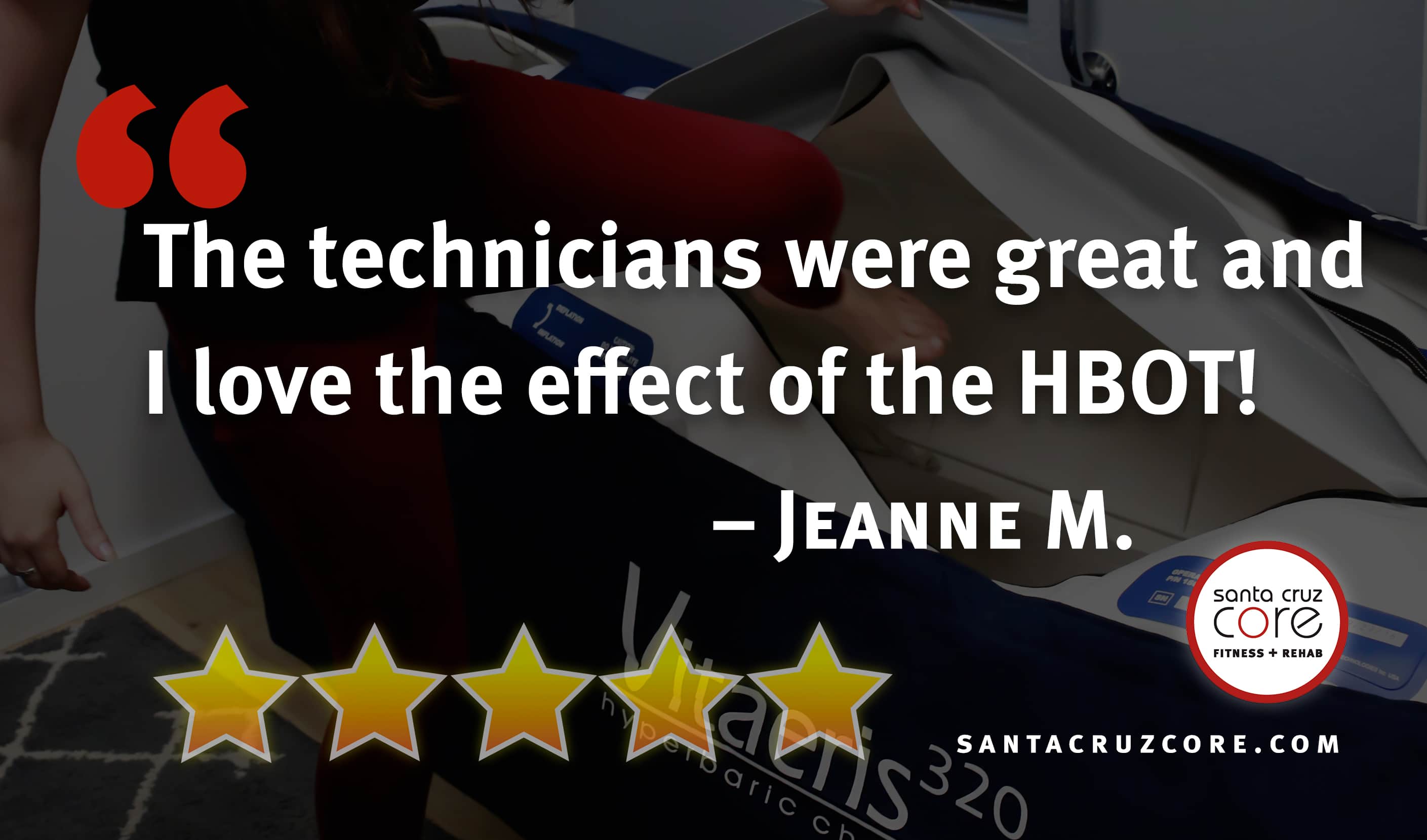 1. Are you using an inflatable tent or a true hyperbaric chamber? If so, how much pressure is applied?

Answer Expand
Our chamber is a Vitaeris 320. According to the company we purchased the device from:

2. What is the mix ratio of oxygen to nitrogen applied inside the tent in gas percentages?

In the chamber, you are given a mask in which you breathe 98% oxygen, as pure oxygen can be toxic. The rest of the tent is at 78-80% nitrogen, matching the amounts in the air outside.

3. Who is monitoring the client receiving the oxygen and who is in charge of the oxygen storage? How are they trained, and for what types of urgencies/emergencies?

There are compressors that are stored in close proximity to the tent and our physician on staff is responsible for the proper storage of the equipment.  Dr. John Grady, D.O. is a board-certified emergency medicine doctor and has trained the appropriate staff on how to use the device. We have the physician meet and provide prior authorization for use of the hyperbaric chamber before the individual's first session to ensure there are no contraindications.  We have a 2-way radio for the individual inside the chamber and the technician monitoring the session.

4. At what rate is the oxygen delivered to the client?

Oxygen is delivered at a rate of 15 liters per minute.

5. Is it better to do Hyperbaric Oxygen Therapy (HBOT) before or after Prolotherapy?

It is good to do HBOT before Prolotherapy to prepare the body for healing. However, one should abstain from HBOT directly after Prolotherapy, as the increase in oxygen can actually kill the stem cells.

6. What can a hyperbaric oxygen chamber help treat?

It is most commonly known for treating “the bends”, or decompression sickness. However, it can also help with headaches and chronic migraines, traumatic brain injuries, sinus issues, concussions, chronic disease, people who have issues with inflammation, and generally for people who aren’t healing appropriately. It can also be used to stimulate stem cells for stem cell therapy. In any case where oxygen cannot reach the damaged area and the body's natural healing ability is unable to properly function, Hyperbaric Oxygen Therapy can stimulate and encourage the healing process.

7. Is there a distinct and noticeable change from before and after being in the hyperbaric oxygen chamber?

You may feel more energized, but for most, it is a subtle change. If you suffer from sleep apnea, snore, or have sinus issues, you may notice a more dramatic effect because you are not getting enough oxygen regularly. However, HBOT is known more for treating long-term conditions, such as preventing microvascular ischemic disease. This is why repeated sessions in the chamber are recommended.

8. How should patients prepare for treatment?

We encourage patients to wear comfortable, clean clothing for their appointment. Before entering the chamber, make sure you have eaten and gone to the restroom. You will be in the chamber for about an hour and although you are permitted to leave during that time, getting up to eat or visit the bathroom will diminish the effects of the chamber and it will take more time to pressurize and de-pressurize the chamber every time your exit and enter. We advise against alcoholic or carbonated drinks before treatment. We also discourage smoking or using other tobacco products during a patient's treatment period as it will interfere with the transport of oxygen.

You are also permitted to bring things into the chamber with you to pass the time, such as books, phones, tablets, and more. If you would like to do more than just rest, you can bring entertainment for yourself to the appointment.

9. How and where is HBOT administered?

Our Hyperbaric Oxygen Therapy is administered in a private setting close to our main office location. Our chamber is made of durable double-sided 44oz urethane-coated polyester, making it a 'tent'. Before entering the chamber, the staff member administering the treatment will explain the procedure with you and make sure you are comfortable before proceeding. You will then receive your own personal oxygen mask that attaches to the hyperbaric chamber. There is a small window on the top of the chamber that allows the staff member setting you up to check in on you. Once you are situated within the chamber and your mask is secure, we will close the chamber and your treatment will begin.

Although there are minor risks (like all medical procedures) to HBOT, it is overall extremely safe. You can be self-referred or prescribed by a physician, and the treatment will be performed under close supervision. All risks will be discussed with you before you sign a consent form for the therapy. If at any time you are experiencing discomfort within the chamber and would like to leave, you will be equipped with a walkie-talkie and your phone to contact our staff. There is also a knob within the chamber that allows you to de-pressurize the chamber yourself in the case of an emergency. These topics will be explained to you before treatment begins.

11. What are the side effects of Hyperbaric Oxygen Therapy?

A common side effect you may experience is "barotrauma" to your ears or sinuses. This is the sensation you feel when traveling to or from high-altitudes and your ears "pop". This often occurs in your first and last 10 minutes of treatment, when the chamber is becoming pressurized or depressurized. If at any time the sensation becomes too intense, you can communicate with our staff and we will slow the rate of pressurization/de-pressurization, minimizing the discomfort you feel.

12. What information should be disclosed by a patient before beginning treatment?

HBOT can be covered by insurance with prior authorization. Prices start at $99 per individual session. However, lower prices are available for recurring sessions or packages.